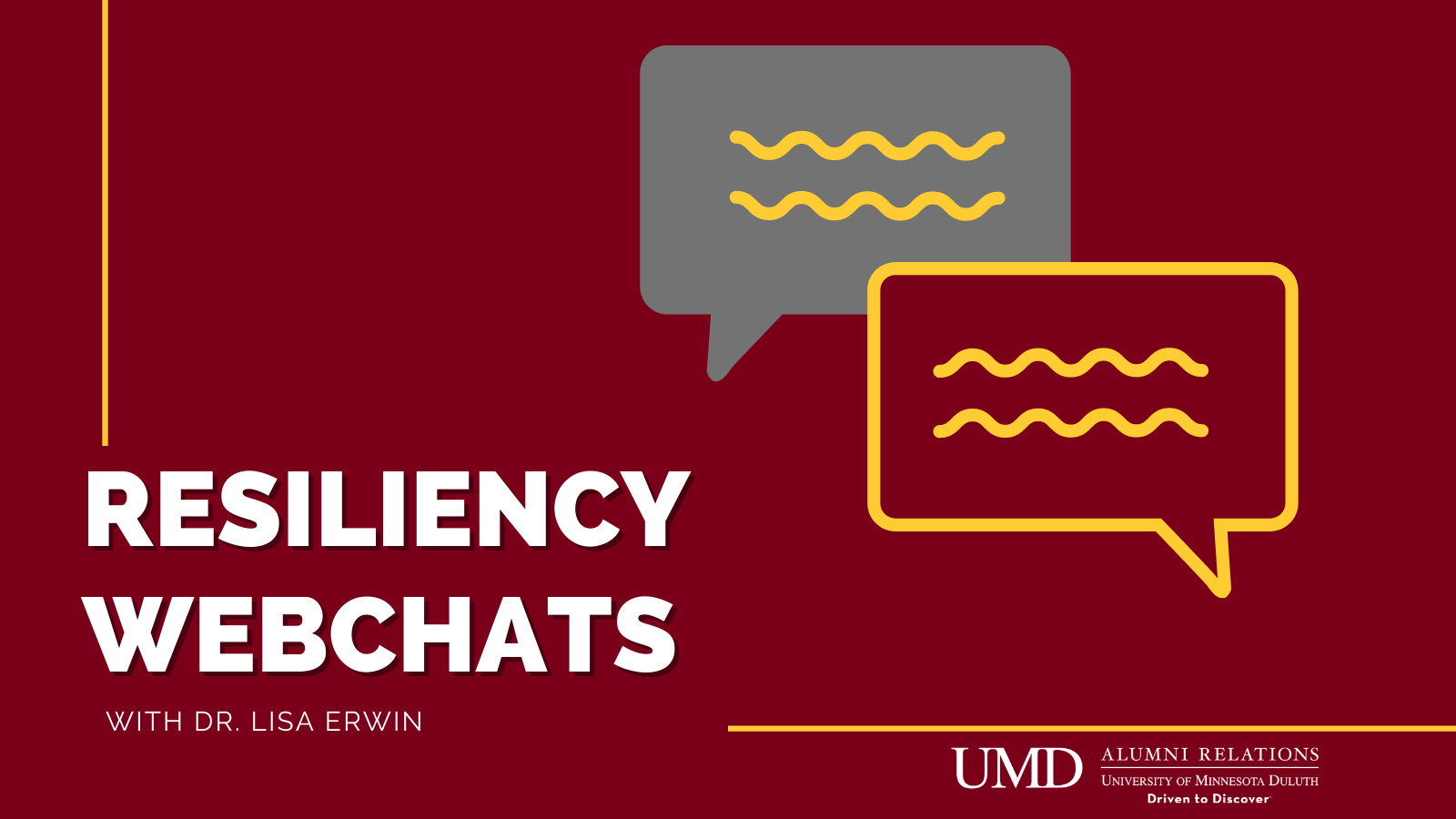 Welcome to the home of Resiliency Webchats, conversations with members of the UMD community about moments in their lives that required resilience. Along with host, Dr. Lisa Erwin, you will learn about the strategies they used to stay strong and move forward in challenging times

Chandana Halaharvi '09 is a first-generation immigrant who attended UMD with the goal of ultimately becoming a doctor. Her path unexpectedly changed when she was not accepted into medical school. In this interview, Chandana talks about how she worked through feelings of shame and hopelessness, and ultimately created a plan for how to persist, and move past rejection. Today, Chandana works as a foot and ankle surgeon in Houston, TX.

Mick McComber '93 was a longtime UMD staff member in the Rec Sports Outdoor Program prior to his retirement in fall 2020. His life suddenly changed when his wife, Lynn, became ill from a rare form of cancer. In this interview, Mick talks about the struggles of losing his wife, and trying to maintain his work and personal life amid the tragic loss. Through one of the most difficult times of his life, Mick shares how he coped by relying on a personal connection to the outdoors and nature, trying new experiences, and how this journey ultimately brought his family even closer together.

Harry Oden '64, MA '80 is a dual-degree holder from UMD with a bachelor's in education in 1964 and a master's in history and education administration in 1980. Dr. Oden was recruited to play basketball at UMD, and went on to become the first Black basketball captain in the University of Minnesota system. In this video, Dr. Oden describes the challenges of attending UMD as a Black student in the 1960s, and the lessons he learned from those experiences.

Jireh Mabamba '17 grew up in the Democratic Republic of Congo. After high school, Rotary International gave him the opportunity to be an exchange student in Duluth, Minnesota. Jireh had to face many challenges and overcome a difficult transition of moving across the country. Jireh helped grow the UMD Rotaract Club and learned the importance of building friendships.

Alta Oben '69 was recruited to join the Central Intelligence Agency (CIA) after graduating from the University of Minnesota UMD. Her career as a military analyst in the intelligence community, and later as a member of a tech startup taught her about the value of patience, preparation, commitment to learning, and mentorship.

Kimberly Swinney '14 was an active student leader at UMD who transitioned into a career in higher education student affairs after graduation. She identifies self-care as critical to her resilience in work and other areas of life. By addressing her needs, Kimberly is better equipped to help others.

Karen Stromme, M.Ed. '05 grew up visiting campus, and now serves as the Associate Athletic Director at UMD. Her humor, positivity, and perseverance are all essential to her role as a leader. Learn more about Karen's story in the latest Resiliency Webchat.

Chancellor Lendley "Lynn" Black began his tenure as Chancellor of the University of Minnesota Duluth in August 2010 and now is transitioning to retirement. You'll hear how Chancellor Black has reflected on his time at UMD, his journey through higher education, and how his background in theater has helped him navigate difficult times.